Fun Facts About Mola-Mola’s in Bali

The Mola Mola, also known as the ‘Bali Sunfish’, is probably the most misunderstood creature on Earth. They have earned a reputation as being some of the weirdest looking marine life in the world, and have even been called “the most useless creature on earth”, but actually Mola Molas are much more capable and impressive than you think.

Here are some facts about this fascinating creature:

Molas are named after a millstone

Due to its gray-coloured round body and rough texture, the Mola Mola earned its name after the Latin word for “millstone”.

They rise up to the surface and spend around half a day sunbathing to warm up their bodies after a good hunt from the depths.

Mola Molas are as heavy as a car

They can grow up to 3 meters (10 feet) long and weigh up to 1 ton (2200 pounds). The largest sunfish ever recorded weighed around 2.25 tons (5000 pounds) making it weigh more than the average pickup truck. They are considered the largest bony fish.


Mola Molas lays the most eggs in the animal kingdom

Mola molas lay more eggs than any other vertebrate, laying up to 300 million eggs at one time!

They are known as “swimming head” in German

The Molas are known as Schwimmender Kopf in German which literally means “swimming head” which is accurate for their appearance. Other countries such as Poland also call them samoglow which means “head alone”.


They are active hunters

It was believed by scientists that Sunfish just spend most of their time sunbathing near the surface and feeding on jellyfishes. In fact, behind their goofy looks, these creatures are actually active hunters who travel several kilometers each day. Hunting the energy-rich parts of jellyfish, small fish, and zooplankton as their common diet.

These are some interesting facts about this weird and unusual looking creature. As weird as they are, divers worldwide are fascinated by Mola Molas, and are willing to travel to the warm seas to get a glimpse of these creatures.

Feel like discovering these majestic ocean dwellers yourself? Blue Season Bali offers full-day trips to Nusa Penida for the best sightings of Mola Molas. Contact us today and come and find these fish in Bali! 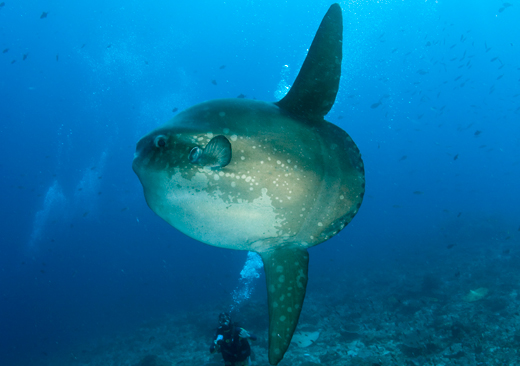 The Complete Guide to Safe Diving with the Sunfish in Bali

Where to See Reef Sharks in Bali Dive Sites