Posted at 14:41h in Environment, Marine Life by boadmin 0 Comments

When diving in Bali we see many different creatures. As we begin our diving journey our students often tell us, that they want to see a turtle, want to see a shark, maybe a clownfish. Often people forget another favorite – the octopus.

The octopus, in general, is mesmerizing to watch because of their camouflage, when hunting or trying to hide from predators. The changing colour of its skin when danger approaches. To do this they use specialized skin cells which change the appearance of the skin by adjusting its colour, opacity, or reflectivity.

We found when diving in Bali a lot of octopus are quite used to divers and tend to reward good behavior. That means keep your distance and only observe, don’t stress the octopus or swim around too much. Multiple times we have witnessed the octopus coming out of their hiding spot and behaving more naturally after only a few minutes of observation. These type of encounters are beautiful as it feels like watching a live documentary and you never quite know what happens next.

Next to the common octopus, there are true rarities that we get to witness diving here in Bali. Let me introduce the rock stars in the octopus family:

Not discovered until 1998 and first described in 2005. Many peoples all-star favorite among the octopus and it’s easy to see why. The mimic octopus is a smaller octopus, growing to a total length of about 60 cm (2 ft), including arms, with a diameter approximately that of a pencil at their widest. Its ability to change shape is the reason it was named the “mimic” octopus, which is its main defense besides camouflage.  It also uses aggressive mimicry to approach wary prey, for example mimicking a crab as an apparent mate, only to devour its deceived suitor. It has been commonly observed taking on the shape of lion fish, sea snakes, flatfish, jellyfish, sole fish and many more. I highly suggest looking it up on YouTube its truly amazing. 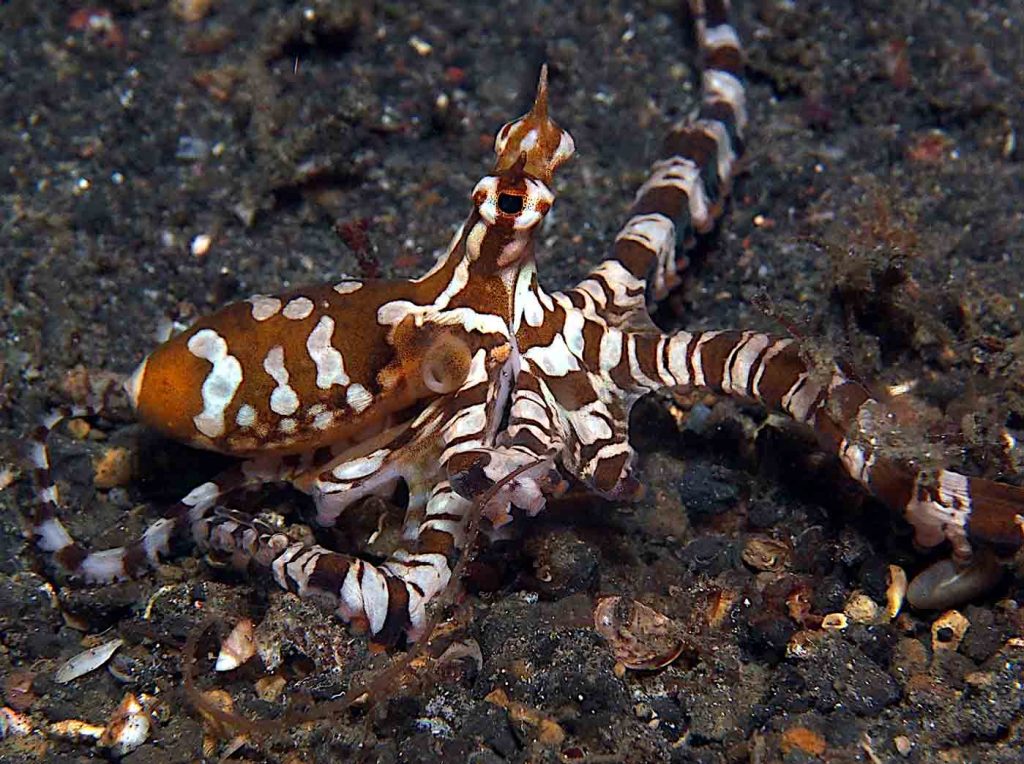 Not discovered until 1980 and first described in 2006. The wunderpus is also known for its ability to mimic other sea animals. The wunderpus can change its color patterns when disturbed or threatened. This quick-change artist is able to change its appearance, both color and shape, in a quick draw in order to get out of harms way. The change of its color patterns allows the wunderpus octopus to either blend in with its surroundings or mimic a venomous species to scare its threat away. 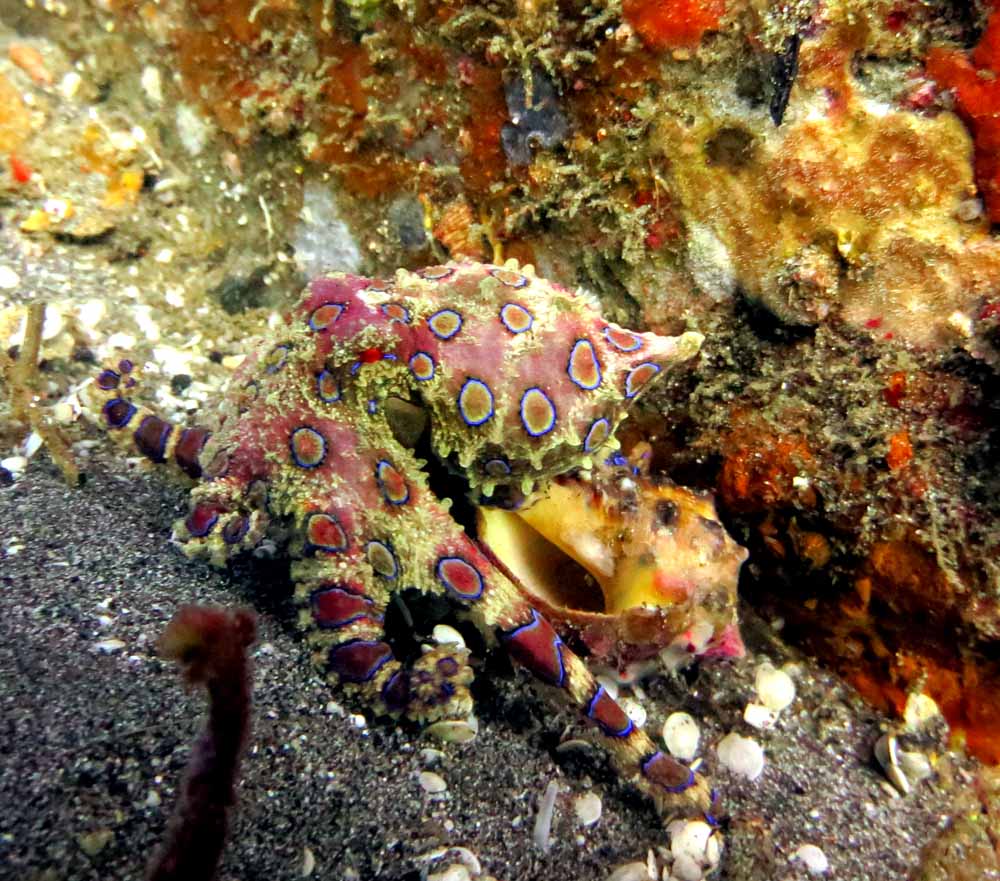 They are recognized as one of the world’s most venomous marine animals. Despite their small size—12 to 20 cm and relatively docile nature, they are dangerous to humans if provoked and handled because of their venom, which contains the powerful neurotoxin tetrodotoxin. Even that being the case, they are still a must-see for almost all underwater photographers I have met. The fragile small body and those hypnotizing rings do bring a certain kind of charm and make the blue-ring octopus highly photogenic. They like to find lairs like shells or old bottles to squeeze into and block the entry by piling up rocks in front of the entry to keep intruders out. When provoked within milliseconds they turn yellow and show of their rings in glowing color to signal that this octopus is not to mess with.

If you love are looking for rare creatures like this, the PADI Underwater Naturalist or PADI Digital Photography specialty might be something you want to look into.

Also consider doing your PADI Divemaster in Bali, if you love finding rare creatures and love to discover rare species, as a lot of Bail’s dive sites are great to spot rare critters, such as rarer octopus as well.