Posted at 14:44h in Environment by boadmin 0 Comments

Surprisingly, PADI divers are one of the sharks’ best friends in the ocean, and not in the tasty snack wrapped in neoprene kind of way. PADI has teamed up with Project AWARE to alert the world of the tragedy of shark finning.

Finning is the act of hauling a shark from the ocean, cutting off its fins and disposing of its usually still alive body, back into the ocean. After this, it can take days for the shark to die a slow, painful death, from drowning or starvation (because it cannot swim) or is slowly picked apart by other sea creatures.

Shark fin is considered a delicacy in many Asian countries, due to recent prosperity in these areas, and minimal regulation of fishing, the demand has sky rocketed and decimated shark populations. According to Stop Shark Finning.net an estimated tens of millions of sharks are killed annually, from this process. Blue Seasons Bali’s sources estimate, that in some of our best dive spots, the high season can see fishermen capturing and Finning between 40-60 sharks per day!

According to Project AWARE “Shark fins usually fetch a much higher price than shark meat, providing an economic incentive for the wasteful and indefensible practice of “finning.” They suggest that through regulation, awareness and the requirement to bring back full sharks there will be less waste and fewer sharks killed. 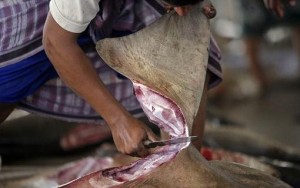 The IUCN (International Union for Conservation of Nature) has classified one third of shark species as threatened/endangered, making it imperative that we do what we can to stop the unregulated fishing.

Without a healthy ecosystem, filled with both predators and prey, there wouldn’t be much to see underwater and with a decrease in shark numbers and variety the balance is thrown off.

You don’t have to give an arm and a leg to the sharks (pun intended), but there are lots of ways you can help!